Hello & welcome back to the Friday Fiction Feature! Tabatha here again, and this time I have a secret to share. Are you ready? Bet you’ll never guess. No really, don’t even try, you’ll never guess it. Ready? I love Halloween! I know. Shocking. Never would have guessed but it’s true. I love the decorations, I love the bats & pumpkins everywhere,I love the socially sanctioned month of gothitude, but most of all, I love to dress up! Since we are now firmly into Halloween month (otherwise known as October), it’s time to start thinking about finding the right costume. Now, you could follow the trends & just go out in lingerie & some cat ears (a tradition which has sadly been limited to women), but that’s the lazy option. A real costume should be much more involved (for instance: by my rules, a costume should rely on more than a headband to distinguish a pirate from a cat from Batgirl) so to help you get started on your costume selection early, this week we’re offering some interesting folks to emulate this year as you go out on your merry trek to scare the pants off the candy-hoarders.

Elvira does make the list because despite her rather noticeable…assets…she is a the figurehead for so many cool things! Awful horror movies, picking on awful horror movies, the awfulness of the 80’s…the list goes on and on! (It is an awfully good costume you know). Heck, she’s even an author! And this literary-inspired costume even comes with a group option: some vampire pals from Transylvania 90210 to slay or…make friends with.

In her first hairdo-raising adventure, Elvira meets the weirdos next door–a pasty-faced group of coffin-carrying bloodsuckers! Elvira likes vampires as much as the next ghoul. But when they start chomping on her friends, the new creeps on the block receive a little visit–from ELvira’s unwelcome wagon. This book begins a new series starring America’s favorite glamour ghoul.

Necessary Equipment: Attitude, puns, black dress w/ knife, cleavage (your own or manufactured because really, only 5 people in the world can wear it on their own), long hair w/ 80’s poof. *Caveat: Only counts if all equipment is present: a black dress with cleavage doesn’t make you Elvira, it just makes you cold!

To do this one well, eschew the bolts & dress like a fop! Dress like a 19th c. doctor (that means frilly sleeves not lab coats folks) and walk around being generally annoying (In your best Percy Shelley style). Remember to always look morose, ignore your date, wax romantic about the nature of life & death, refer vaguely to your ‘sins’ and ‘responsibilities’ and then wander away from the party early without telling the host why. Bonus option: if you have a kid, run out of the room screaming every time he/she walks into the room!

Frankenstein tells the story of committed science student Victor Frankenstein. Obsessed with discovering the cause of generation and life and bestowing animation upon lifeless matter, Frankenstein assembles a human being from stolen body parts but; upon bringing it to life, he recoils in horror at the creature’s hideousness. Tormented by isolation and loneliness, the once-innocent creature turns to evil and unleashes a campaign of murderous revenge against his creator, Frankenstein.

The Addams Family: An Evilution by Charles Addams & Kevin Miserocchi

The next selection is a very versatile idea: The Addams Family! In deciding to emulate the Addams family, you can either dress up as your favorite character: Wednesday, Morticia, Lurch, Gomez, Uncle Fester, Pugsley, Cousin It, Thing, etc. (P.S. if someone manages to dress up as Thing- please let me know how!) Or you can have a family costume with everyone joining in as one family member. You can even include friends as terrified neighbors  & your new baby as Pubert! If these options aren’t enough (or you have a sullen teenager who refuses to join in the morbid fun) just remember Wednesday’s costume when she shows up in her normal clothes: “I’m a homicidal maniac. They look just like everyone else.” The easiest costume possible, provided you’re willing to repeat that line over and over and over and over…

If that’s not easy enough, we’ll even help out with the costume design! The Addams Family: An Evilution shows you comics of the Addams family over the years so you can get a good chuckle while you double-check your Wednesday-braids against the original.

The Addams Family: An Evilution is the first book to trace The Addams Family history, presenting more than 200 cartoons created by Charles Addams (American, 1912-1988) throughout his prolific career; many have never been published before. Text by H. Kevin Miserocchi, director of the Tee and Charles Addams Foundation, offers a revealing chronology of each character’s evolution, while Addams’s own incisive character descriptions, originally penned for the benefit of the television show producers, introduce each chapter. As the presence of the Family continues to permeate generation after generation, and in celebration of the Broadway musical debuting in 2010, this book reminds us where these oddly lovable characters came from and, in doing so, offers a lasting tribute to one of America’s greatest humorists. Includes more than 200 cartoons (approximately 50 are published here for the first time), many in color.

Let’s Panic About Babies!: How to Endure and Possibly Triumph Over the Adorable Tyrant who Will Ruin Your Body, Destroy Your Life, Liquefy Your Brain, and Finally Turn You into a Worthwhile Human Being by Alice Bradley & Eden M. Kennedy 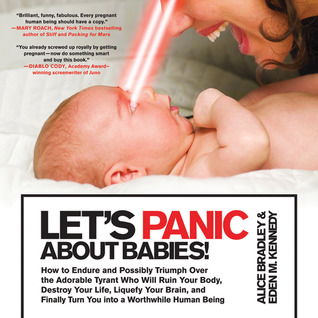 I was once told that I wore the scariest costume in the room when I showed up to a Halloween party still in my Walmart uniform. While I’ll definitely call that a terrifying one, the last few years have shown me an even more frightening figure: crazy person with baby. Think about it; what’s more terrifying than a person who has not slept in 6 months, who doesn’t remember a time when he/she didn’t have mysterious food/bodily fluids/who knows spots on every article of clothing, and worse, a person who willingly supports and feeds their tormentor, maintaining it from it’s beginning as a parasite through its development into a practiced poo-throwing machine. You’ve even got a handy how-to guide for your appearance & appropriate level of crazy in Let’s Panic About Babies! Your friends can’t possibly compete with this level of insanity: even mad scientists keep their apocalyptic horror beasts in cages.

Warning: The humor of this costume may depend on your audience. Probably not recommended for your brother’s “my baby & me” class get-together.

BABIES. Maybe you’re thinking of having one. There might even be one inside you right now, draining nutrients from your system via a tube growing from its midsection. Or maybe you’ve already got one around the house, somewhere, and you’re responsible for its continued survival. You’re saddled with a helpless being whom you’ve agreed to house and feed and love with all your heart for the rest of your life, more or less.
Either way, you’re confused, you’re frightened, and 911 won’t take your calls anymore. But don’t despair! Let’s Panic About Babies! is here to hold your hand and answer some important, age-old baby-related questions, including:
– How can I be sure I’m pregnant? (Torso swells gradually until baby falls into underpants.)
– Did I just pee myself? (Yes.)
– What happens if I have sex during my pregnancy? (Your baby will be born with a full, lush beard.)
– How can I tell if I’ve chosen the wrong pediatrician? (He/she can’t pronounce “stethoscope.”)
– How do I make sure my baby loves me back? (Voodoo.)
From the moment they’re created until the day they steal our cars, our babies demand center stage in our lives. So join Alice and Eden as they tell you (and your lucky partner!) exactly what to think and feel and do, from morning sickness to baby’s first steps. They know everything!

Necessary Equipment: Plastic baby, hair frazzled until it stands straight up at the back of your head, stain-covered sweat shirt & sweat pants, a wild I-haven’t-slept-in-years look in your eyes, & belief that poop stories are funny & good dinner conversation.

In the Peanut Gallery with Mystery Science Theater 3000: Essays on Film, Fandom, Technology and the Culture of Riffing by Robert G. Weiner, Shelley E. Barba

Now this last costume was not as novel-inspired as I would have liked, but I think it warrants inclusion on the basis of how fun it could be. Just think: you & 2-4 friends dress up as JoelorMike & the bots, sit down wherever you want with folding chairs & just start heckling. Everything. Narrate conversations from afar, concoct implausible B-movie plot-lines for the people next to you based on their costumes, start singing bad background music when it’s quite for too long. And when people ask who you are, or why an academic/all-around-smart-person (as I know you all are) would want to dress up as a line of heckling robots, you can assure them that you are simply referencing a known academic work integrating culture phenomenon and its critical & social interpretation into the broader framework of pervasive media as proven in thier text In the Peanut Gallery with Mystery Science Theater 3000: Essays on Film, Fandom, Technology and the Culture of Riffing.
The award-winning television series Mystery Science Theater 3000 (1988-1999) has been described as “the smartest, funniest show in America,” and forever changed the way we watch movies. The series featured a human host and a pair of robotic puppets who, while being subjected to some of the worst films ever made, provided ongoing hilarious and insightful commentary in a style popularly known as “riffing.” These essays represent the first full-length scholarly analysis of Mystery Science Theater 3000–MST3K–which blossomed from humble beginnings as a Minnesota public-access television show into a cultural phenomenon on two major cable networks. The book includes interviews with series creator Joel Hodgson and cast members Kevin Murphy and Trace Beaulieu.

*Alternate costume choice: do the same things, but instead dress up as Statler & Waldorf